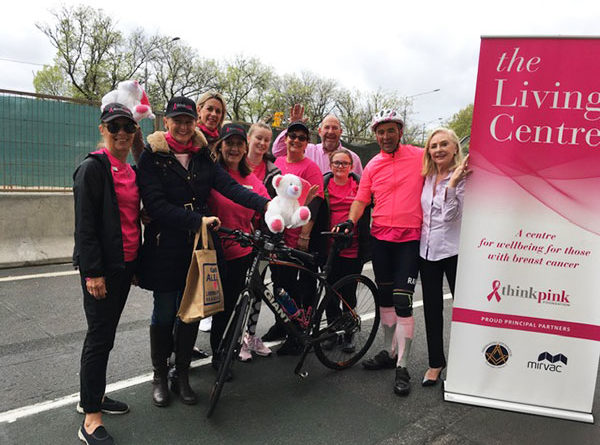 09/10/2018 Volunteer Administration
Martin Howley, a fifty-year-old Irishman who lost his mother and sweetheart to Breast Cancer, arrived in Melbourne and was welcomed at The Living Centre on Thursday morning after riding from Sydney as part of a 4,343 kilometre fundraising ride in support of the Think Pink Foundation. Martin will start riding the 763 kilometres to Adelaide on Saturday morning.
Martin said he expected to finish the ride, in honour of his mother Claire and girlfriend, on Sunday 28 October 2018 in Perth.
The ride has been timed for the month of October – Breast Cancer Awareness month.
“I have been gearing up the training for the ride for the past eight months. The ride includes pedalling from Sydney to Melbourne, then Melbourne to Adelaide and Adelaide to Perth, to make a difference by fundraising for the Think Pink Foundation and its Living Centre.”
You can support Martin’s fundraising efforts on behalf of Think Pink here: https://www.martinhowleycharitycycle.com/
Think Pink Foundation