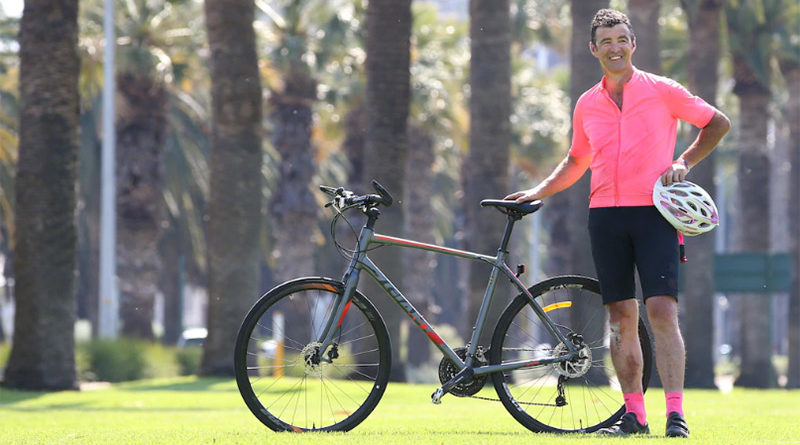 Martin Howley knows too well the devastating effects of cancer.

In 2004, Mr Howley lost the love of his life, Maria, to breast cancer.

Five years ago, he had to bury his mother, Claire, after she lost her battle with the disease — this time the cancer was in her lungs. This year, cancer took the lives of an aunt and his best friend’s brother.

As he approached his 50th birthday in January, Mr Howley, who spent years battling depression and survived suicide attempts, felt overwhelmed that he was still alive.

So the Caversham man decided to celebrate the milestone by helping a cause close to his heart. Originally from Ireland, Mr Howley spent this month — Breast Cancer Awareness Month — raising money for two charities by riding his bicycle 4343km across the country from Sydney to Perth.

“I couldn’t believe I was going to be 50 this year,” he told The West Australian after arriving at Langley Park yesterday.

“So I thought, you know what, I still miss my girlfriend … I still miss my lovely mum and I raised $40,000 three years ago with the Harry Perkins medical centre here in Perth.

“So I thought bugger it, I’ll do something again for cancer in memory of my girlfriend, my mum and my lovely auntie who passed away as well this year.”

Over the past month, Mr Howley raised almost $28,000 for Melbourne’s Think Pink Foundation, a volunteer-based charity that through its Living Centre provides free physical, psychological and emotional support for people diagnosed with breast cancer. Some of the money will also go to Irish charity Cancer Care West.

Mr Howley, who rode about 100km a day, said he enjoyed the ride. “I can look back and say I’ve done something proud for the people I’ve lost in my life with cancer,” he said.

But the journey was not without incident. His efforts to get to Perth yesterday afternoon were almost foiled when he fell off his bike going over train tracks in the Wheatbelt on Saturday.

But he said it was as though “Jesus Christ or the universe was looking over me” because an ambulance happened to drive past minutes later and stopped to clean his leg wound.

If you or someone you know is thinking about suicide, phone Lifeline on 13 11 14

Original Article by The West Australian can be read here